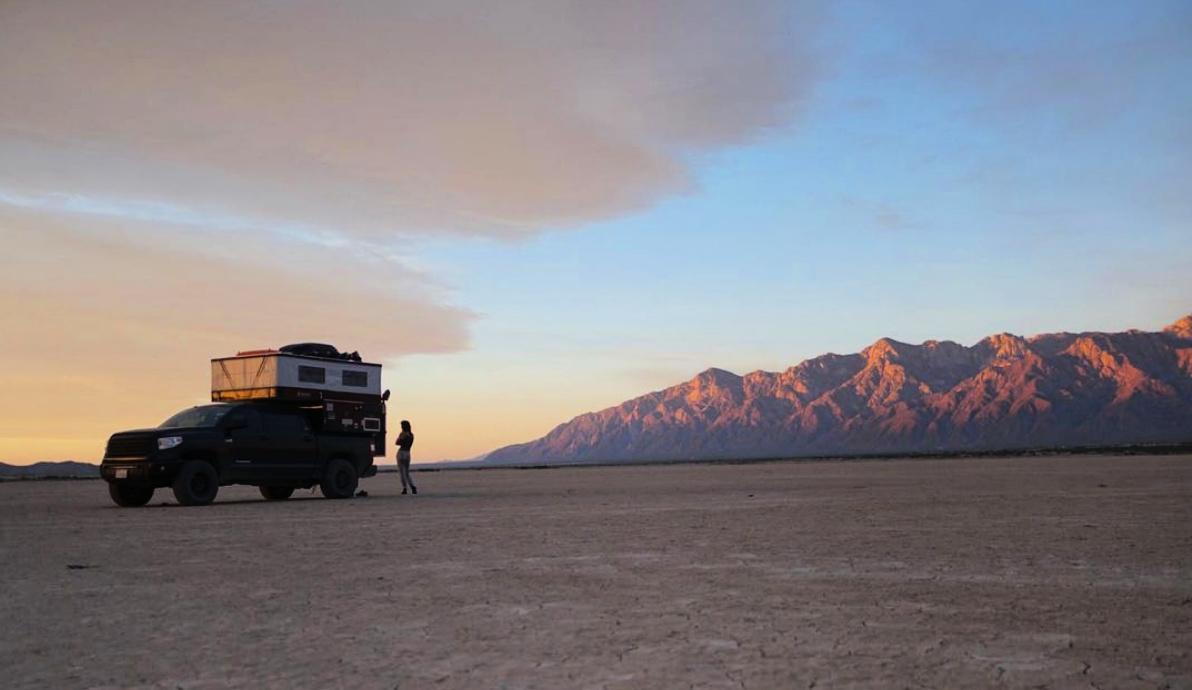 You may have seen him on the big screen acting opposite Tom Cruise in War of the Worlds, or on television on the show Shameless. But in his off-time, Justin Chatwin prefers camping and dirt biking to the glitz and glamour of Los Angeles.

Chatwin did extensive camping in a pickup truck camper shell before deciding he wanted something a little more comfortable for his backroads adventures.

“I wanted a fridge. I got tired of getting ice every day or two. I wanted water, a comfier bed,” said Chatwin. “So, on day I was scrolling Instagram and saw Bound for Nowhere’s truck camper by Four Wheel Campers, and it looked so cool, I just become obsessed.”

He couldn’t stop looking at truck campers online and on the road, so decided to take the plunge and buy a Four Wheel camper called The Raven.

“I have a Toyota Tundra that was already built out with suspension, wheels and a light bar, and I wanted something I could just easily put on my truck,” said Chatwin.

Overlanding Baja in a Truck Camper

Chatwin’s first trip in his new truck camper was to Baja, California with his girlfriend. The two spent six months exploring the bays, beaches, mountains, towns and missions of the Baja peninsula.

“I’ve been going to Mexico for years,” said Chatwin. “I rode my Harley to La Ventana 11 years ago. I’ve really gotten to know Mexico and it’s totally won over my heart as one of my favorite places.”

The couple used the iOverlander boondocking app plus sailing guides to find the best secluded campsites.

“I had about 12 places on the map I’d never been to, like really remote beaches and little peninsulas,” said Chatwin. “I went to destinations I wanted to sail to, but I just drove there in my truck instead. Some people would stay for a couple weeks, but we’d usually stay 5-6 days.”

They also stayed on private property, paying locals between $2-$10 per night to park in picturesque settings. Locals would come over to offer fresh fish, fresh shrimp and even kayak rentals.

Read the full article on The Wayward Home

Approx. Sept. 27th, 2021 we will have completed the move of our Northern California Factory to our new location. We are still located in Woodland, but we will be about 1 mile down the street and will have a nicer, newer, and bigger warehouse. Our new factory & camper showroom address is . . . Four Wheel Campers, 1400 Churchill Downs Avenue, Woodland, CA 95776. We invite you to come see our new digs in the near future!

This has been our busiest year in the history of our company (49+ years). New camper orders are out pacing our production capabilities. Unfortunately this has resulted in historically long lead times. We encourage you to connect with your nearest dealer so that you can discover what their order schedule looks like, and when possibly to place your new camper order to meet your 2022 trip needs.